The United Association has been at the forefront of the fight for workers’ rights for over 100 years.

The United Association was officially born on October 11, 1889.

The birth of the United Association dates back to the year 1889, when a Boston plumber named P. J. Quinlan addressed a brief letter to Richard A. O’Brien, a plumber in Washington, D.C. “Dear Sir and Brother,” the letter began, “I take the liberty of addressing a few lines to you to obtain your views as regards the formation of a United Brotherhood…”

The author of the letter would become the first General President and its recipient the first General Secretary-Treasurer of the United Association. Prior to 1889, plumbers, steamfitters and gas fitters who were organized were members of independent local unions with either no affiliation, or affiliation with a variety of trades.

By 1889, however, with existing organizations declining or becoming devoted to only one craft, local union leaders began to consider other ways to unite national pipe trades journeymen to deal with mutual problems, including how to treat traveling members, build apprenticeship, and provide strike aid. In response to these issues, the United Association was officially born on October 11, 1889. The original name of the organization was the United Association of Journeymen Plumbers, Gas Fitters, Steam Fitters and Steam Fitters’ Helpers of the United States and Canada.

At the turn of the century, early UA leaders faced new challenges and were forced to make numerous controversial and revolutionary decisions. Among these was establishment of a mechanism that would allow UA members to travel to jobs throughout the United States and Canada. The clearance card system was created to enable unemployed journeymen in one locality to travel to work in another.

This “mobility” became especially important during the early 1900’s, when the construction industry entered a period of tremendous expansion. From 1898 to 1914, the UA quadrupled its membership.

During these years, under the leadership of General President John S. Kelley, steps were taken to strengthen the UA on a national basis. One such step was the establishment of the stamp system of dues collection. This move dramatically improved the UA’s financial stability and provided a means of compiling a reliable list of affiliated local unions and their membership.

Significant progress toward a sound, modern union came in 1902 in Omaha, Nebraska, when delegates to the UA convention approved a plan to provide a comprehensive system of sick, death, and strike benefits.

During the first two decades of the 20th century, the UA moved boldly into the forefront of the North American labour movement. Landmark accomplishments included the creation of a formal five-year apprenticeship program, the expansion of UA influence to include construction of industrial plants and public utilities, and a growth in membership to 60,000 by the year 1929.

Disaster struck in the form of the Great Depression. With the stock market crash of 1929 and the failure of many banks, the U.S. and Canadian economies could not sustain the level of growth that had been experienced following World War I. As a result, construction came to a standstill, UA membership dropped to less than 35,000, and no conventions were held between 1928 and 1938.

The Depression took a heavy toll on the UA. Members who had worked all their lives suddenly found themselves without jobs, suffering economic deprivation and a loss of pride. Nevertheless, these years were marked by courage and sacrifice, with members helping members so that all might survive. With the advent of the New Deal under President Franklin D. Roosevelt, the UA went back to work. UA members throughout the United States and Canada undertook the extensive projects we now recognize as lasting monuments to perseverance in the face of adversity.

Through the Public Works Administration and the Works Progress Administration, the UA helped build the dams, roads, libraries, schools, public buildings and housing projects that are an enduring legacy to the craftsmanship of UA workers and other members of the building trades. 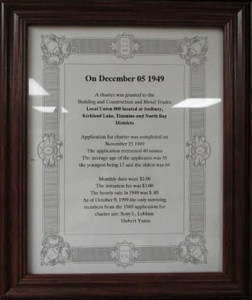 By 1941, UA membership had reached 81,000. That number soared to 210,000 during World War II. Thousands of UA members enlisted in the armed forces and served bravely in conflicts all over the world. Back home, UA members were put to work in shipyards, weapons plants, aircraft factories, and other facilities. Some members also served in military construction units overseas.

During these years, the UA grew in both membership and prestige. Wartime construction contributed to this rise, but other events also enhanced the strength of the UA. One of those was the development of national agreements between the UA and large, national contractors. The landmark UA-NCA (National Constructors Association) National Construction Agreement was signed in 1941. 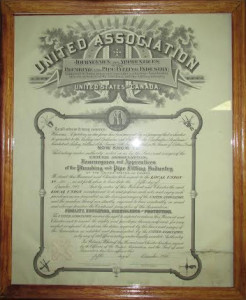 The post-war years were also marked by the rise of one of organized labour’s most prominent leaders — George Meany, the first president of the newly-formed merger of the two principal labour organizations (the American Federation of Labour and the Congress of Industrial Organizations) into the AFL-CIO. A plain-spoken man of great courage and dignity, he was perhaps the most influential figure in shaping the American labour movement from the mid-1950’s until his death in 1980. George Meany was also a proud member of United Association Local 2 in New York City.

The ties between the UA and the AFL-CIO have always been strong. The UA became an affiliate of the American Federation of Labour in 1897, and the United Association General Office in Washington, D.C. was originally built by Samuel Gompers in 1915-16 to serve as AFL headquarters. Today, the UA is one of the strongest forces within the Building and Construction Trades Department of the AFL-CIO.

In 1989, the UA proudly celebrated its 100th anniversary. As we move into the new century, the UA remains a strong, vital organization comprised of thousands of highly skilled men and women who have joined together for a common purpose. Today’s UA members use their skills in commercial, industrial, and residential arenas. Among the many projects on which UA members can be found are single-family homes, and high-rise apartment buildings, large and small office complexes, power plants, refineries and factories.

To ensure that there remains a steady supply of tradesmen skilled enough to meet the challenges of today’s diverse and expanding construction industry, the UA has shaped a superb training program. In fact, the UA’s commitment to training is unsurpassed among trade unions worldwide. The journeymen produced by this training program over the years are the backbone of the United Association.

From humble beginnings of 40 delegates representing 23 independent unions in 10 states and the District of Columbia, the United Association has grown to a powerful, international union representing over 300,000 members in more than 400 local unions throughout the United States and Canada. The UA has been at the forefront of the fight for worker’s rights for over 100 years. Now, as we move into a new millennium we are faced with many new and imposing obstacles. To prepare our membership for the rapid advancements in technology and the way business is conducted, the UA has developed one of the most extensive training programs of any union in the world, spending more than $1 million dollars a week ensuring that our members are prepared for the future.

Of Journeymen and Apprentices of the Plumbing and Pipe Fitting Industry of the United States, Canada, Australia and Ireland